With a history dating back to the 1800s, Dexter-Russell, Inc. carries the reputation of being the largest manufacturer of professional cutlery in the US.

Henry Harrington – the man who found the first cutlery company in the USA in 1818 - introduced the trade name Dexter – a line of fine cutlery. 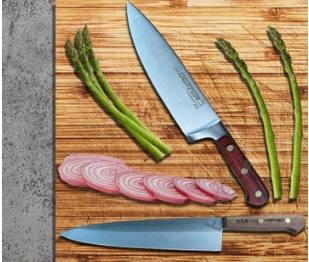 From axes to knives

John Russell established a company called the Green River which produced chisels and axe heads. The fine design and detailing of the products led to its expansion into cutlery.

In 2001, the Russell Harrington Cutlery Company changed its name to Dexter-Russell, Inc. going by its product brand identity.

From steak knives to the rugged hunting knives or the sharp paring knives and pocket knives, or cutters, Dexter Russell Inc., caters to all kinds of market demands through its quality offerings. Handcrafted by cutlery experts, the company sells knives for everyday use.

Company Profile
As proud successor oldest American cutlery manufacturers - John Russell Cutlery and Harrington Cutlery Company Company - Dexter Russell Inc., has been serving the food services industry since ages. Throughout the long and rich history of being in the business, the company has maintained a tradition of superiority in workmanship as well as materials.